about the dress & the tutorial

I named this pattern “Crown Stitch” because the lacy part between groups of dcs reminded me of the royal symbol – the crown.

Some time ago I fell madly in love with a dress similar to “Crown Stitch Dress” which I found in a magazine. The instructions were very basic and short, but I decided to give it a try. I ended up making the dress my way with most changes in the bust area. When I published the finished project on Ravelry, I got many likes, questions and requests for the pattern, so I decided to write the instructions. Being completely inexperienced with writing patterns, I created just a bit more detailed tutorial than the one in the magazine, and realized that it needed serious improvement. In the mean time, I read lots of other crochet tutorials, and became aware of how a well composed tutorial is supposed to look like. Therefore, the updated, enhanced version of the pattern is written with detailed directions, supported by more photos of better quality, which present the dress from different angles. This is my second designer pattern, so, I would appreciate comments and suggestions.

This post contains general explanation about crocheting the dress, and is intended for very experienced crocheters who can manage without detailed directions. The precise and thorough tutorial is available on Ravelry at a price of 2.50 EUR. 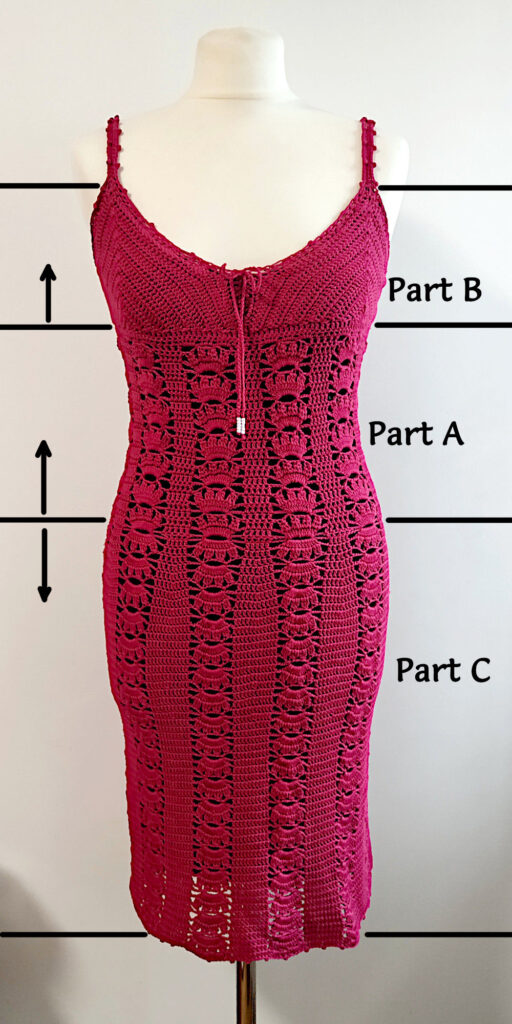 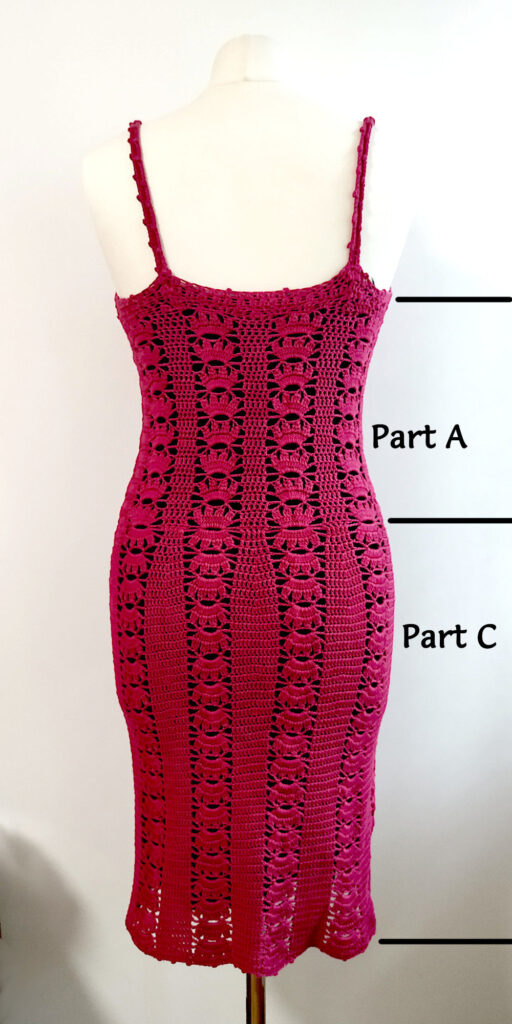 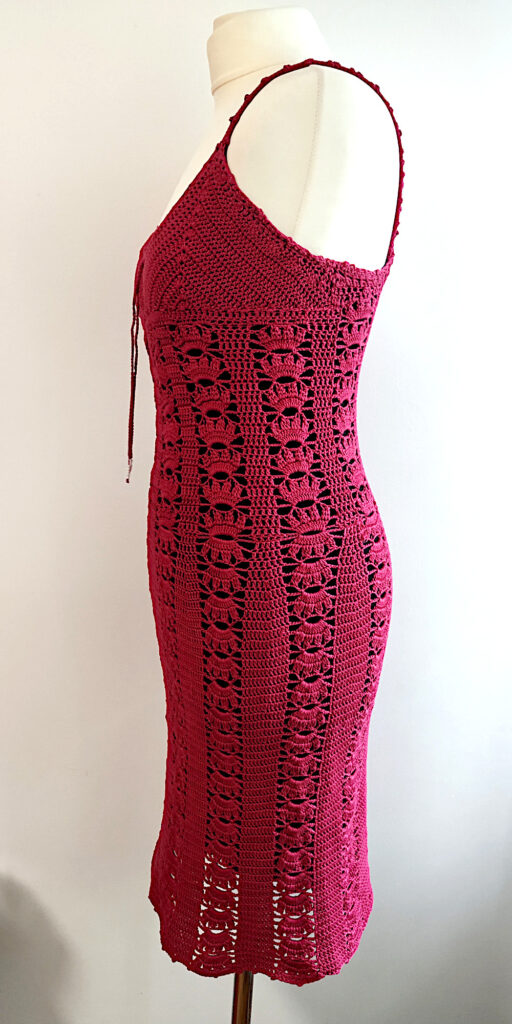 This pattern is written for intermediate level of crochet skills and it presumes that the crocheter is familiar with round crochet. You should also be able to read the diagram as it will make the work a lot easier. Beside the diagram showing the Crown Stitch, the paid PDF instructions have detailed written directions followed by appropriate photos and other diagrams and drawings.

This garment is designed to fit tightly to the body and point out your curves. Keep in mind that crocheted clothes stretch when worn, so in case you wish the dress to be very tight, choose to crochet one size smaller than your usual size. If you want the normal fit, follow the pattern in your size. 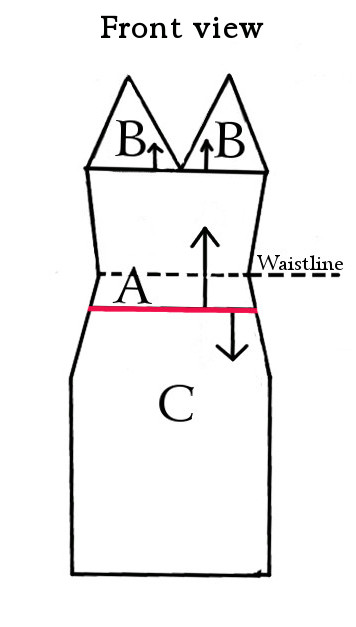 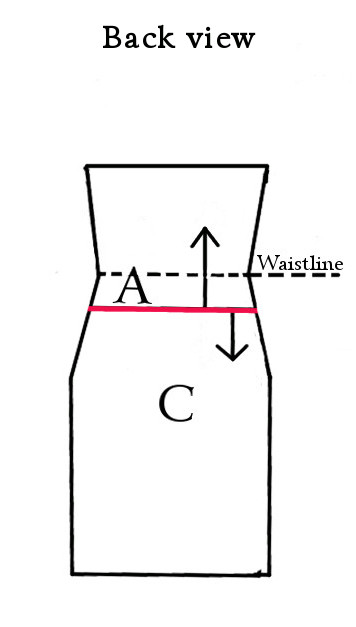 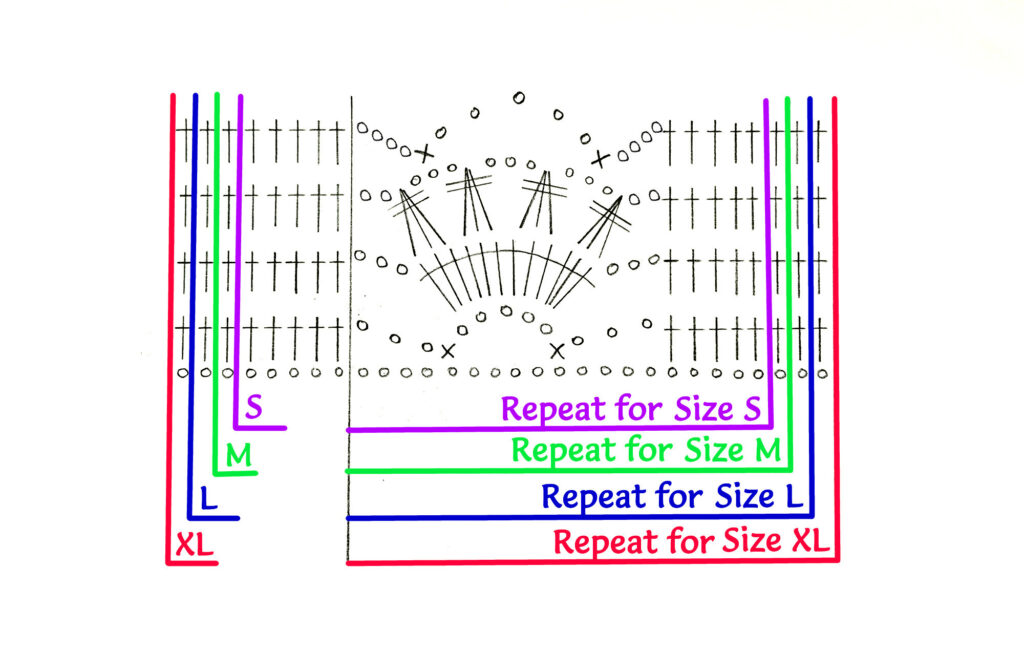 1. Start by crocheting Part A first. Begin from the red line up, as shown in the Drawing below.

2. Next, crochet the Cups (Part B) one by one, and directly onto the last round of Part A. The cups are worked with dc and in each row the mid cup has a decrease of 3dc worked together to shape the cup into a convex triangle.

3. Then, crochet the Skirt (C) from the red line down. Follow the same Diagram as for Part A.

Finally, the Straps are made starting from the back of the dress and worked towards the cups. Additionally, the finishing touch is crocheting the decorative border with sc and picots on the bottom edge of the skirt, as well as around the cleavage, top edge of the back, under arms and along the straps. The photo below is the same illustration of dress parts as the Drawing above.

Since the “crown” pattern of this dress is quite transparent, I recommend lining the dress. (This tutorial doesn’t contain instructions for lining the dress.) Optionally, you can buy a light, short dress with low back and deep cleavage to wear beneath.